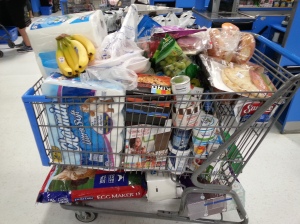 A couple of days ago, I posted the above picture on my Facebook and Instagram. Fellow moms were sympathetic to my overflowing cart and let me know I’m not alone. So I thought I’d delve a little deeper into the actual trip behind the cart.

I’m going to start off by saying I have a serious love/hate relationship with Walmart. Yes, that was at Walmart! What do I love about that place? Well, it’s a one stop shop. Not only can I get food, but I can also get toilet paper and 12 gauge shotgun shells. All at the same store! Pretty amazing, right?!?! On to the hate part….. well, I hate that it’s always so crowded. And crowded with people who are quite the characters. Not everyone shopping there is “out there” but come on, we’ve all seen the “People of Walmart” pictures. And it’s totally true! Second, they seem to constantly be out of stock of specific items I go there to get. And third, it’s crowded. I know I already said that, but I really hate fighting my way down the aisles and waiting in long lines. I’m kind of a germaphobe and being so close to strangers freaks me out just a tad.

Aside from that, on this recent trip I knew I needed a lot of stuff because I hadn’t gone grocery shopping for at least a week and a half. My kids were pleading with me to go shopping because we had “nothing” in the house. So I knew I was in for picking up a big haul at the store. And since my kids were at school, I was all alone pushing the cart and the possibility of a second cart was completely out.

One item on my list was chicken food. And of course Walmart carries that!!! So I loaded that 40 pound bag under the cart but I was a little off and it was hanging off a bit. So I pulled on the bottom of the bag and tried to get it onto the cart better and lo and behold, the bag ripped off at the label and I slammed my arm into the cart. Let me back up a little and say that the day prior, Adam and I had played in the mom/pop softball tournament for our oldest daughter’s softball league. And who knew that playing softball was a full body exercise! I didn’t. So my whole entire body was aching. And slamming my already super sore arm on the cart just made me feel angry and like crying all at the same time. I hate you Walmart.

Next, I needed tissues. You know, Kleenex (but I like Puffs). And at this exact time, about 10 employees were rearranging that whole aisle and had put away the ENTIRE stock of tissue. So I had to ask and they had to go back and get it not only for me, but another woman who appeared as dismayed as I was that they’d removed the tissue!

On, and on I can go (they were out of stock of so many things I went there for) but it wasn’t my best shopping trip. I ended up spending $300+ and still wasn’t able to get everything I needed, simply because there was just no more room in my cart. It was miraculous that I got it all back into the cart after it was bagged up, but I do attribute that to my neat and orderly loading of the belt and packing of the cart.

But I did end up picking up a couple of items that are to die for!!! This frozen custard is bound to make me gain some unwanted pounds and these mini naans are perfect for little pizzas for the kids to take to school. 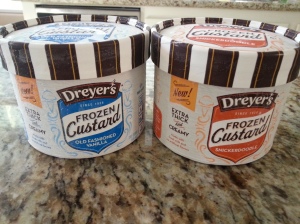 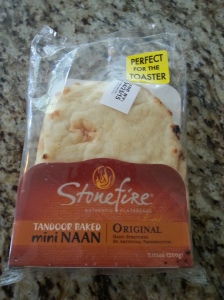 2 thoughts on “A trip to the store”