As I told you all in my last post, I was in San Diego for the weekend with my hubby. While there, we stopped at the nearby Grocery Outlet Bargain Market that my mom turned me on to. She’s a big San Diego fan and seems to know where everything’s at down there. So last time I was there, she took me to this place and I really liked it. Good prices and some really good items. They have a section against the back wall that seems to be for all the healthy stuff. And the prices are much better than what I’m typically used to spending. 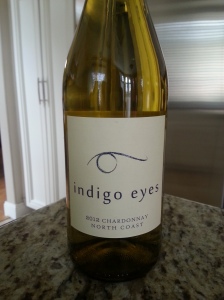 Last time I was there, I picked up some wine that my mom recommended. 3.99 a bottle! And it’s good. Really! So of course I had to pick up a couple bottles this time around. Indigo Eyes Chardonnay. I have never seen this wine anywhere else so be on the lookout for this stuff. 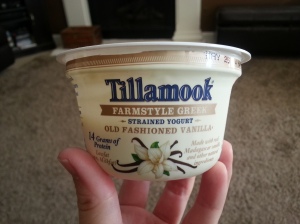 I also grabbed some Tillamook Farmstyle Greek Yogurt. I don’t even really like yogurt. Basically, the texture makes me gag. And Greek yogurt is usually too tangy for me. But I know it’s good for you and so for a super quick breakfast, I take a cup of yogurt into the car with me and put it in my cup holder. And eat it as I take the kids to school. People who see me eating yogurt while driving must think it’s weird, but it’s not messy at all and saves me time! Multitasking at it’s best. Anyhow, my favorite yogurt so far has been Fage Fruyo. It’s not tangy like other Greek yogurts. But it’s really expensive. So I only buy that when it’s on sale. But when I saw the Tillamook at Grocery Outlet, I had to get it. It was only $.50 per cup. Less than half the price of my favorite Fruyo. And guess what? It’s delicious! Thick, creamy, and not too tangy. I highly recommend it. Pretty sure they carry this yogurt at most stores, although I haven’t seen it at my local Wal-Mart yet.

So those are my two budget friendly finds. And if you’re ever wandering around downtown San Diego, check out Grocery Outlet and pick up a bottle of wine and maybe some yogurt too.