Dare I call these breakfast cakies? Well, they remind me of zucchini bread. Scrumptious bite sized morsels of zucchini bread. Which is very appropriate to eat at breakfast time. I know one thing for sure. I ate these for breakfast and I also ate them for dessert. So I guess they’re versatile cakies.

I’ve been doing some baking experimenting and I’ll tell you this. It for once, hasn’t ended in disaster. Which is amazing considering my track record. I’m not saying I’m going to open up a bake shop or anything but still, it’s a small victory for me! And these cakies were one of my experiments that ended with a full tummy. Because I stuffed my face when these things cooled off.

Breakfast? Dessert? A snack when your kids aren’t looking? It doesn’t really matter because these things are purty darn good ANY time of day! And they can’t be too bad for you, right? I mean, they have vegetables in them! So have at it!!

P.S. They’re delicious with a cup of coffee.

Preheat your oven to 350. In a stand mixer, add the butter and sugar and mix until fully combined. Add the eggs and vanilla and mix together. Then add the baking powder, cinnamon and salt. Mix. Add the flour 1 cup at a time, mixing just until combined. Add in the shredded zucchini and mix again until combined. Using a cookie scooper, scoop the dough and place the cakie dough balls onto a baking sheet. (If you have old baking sheets like I used to, I’d recommend spraying them with cooking spray. But if you’ve got nice new ones, leave them ungreased.) Using a spoon, sprinkle the cinnamon sugar mixture over the top of each cakie. Bake for 10-12 minutes, or just until the underside of the cakie turns slightly golden. These cakies do not get golden on top.  Leave on the baking sheets for a few minutes, then transfer to a cooling rack. When cakies are completely cooled, place in an airtight container.

So after these had all cooled off, my youngest daughter got the first taste since the other girls were at school. She liked them so much that she told my other kids this when they got home. “Mommy made something with disgusting green stuff in it but they’re really good!” She has a way with words, that little girl of mine. 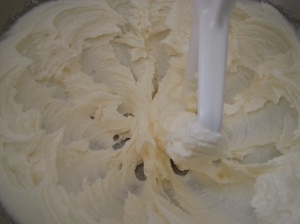 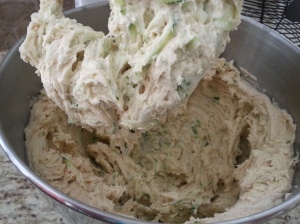 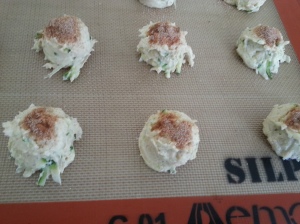 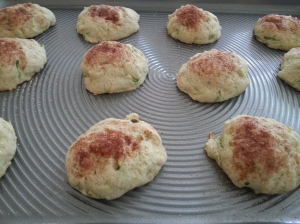