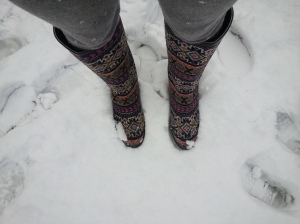 Well, on New Year’s Eve, I was woken up at 3:30 am to an extremely excited, giant man child telling me that it was snowing outside. I’ve lived in So Cal for the last 25 years and have only seen it snow ONCE, and it barely stuck to the ground. So my grumpy self got up and looked out the window and saw, yes a little bit of snow. I got back in bed only for Adam (aka giant man child) to come back in 10 minutes later and tell me to look again. And it was snowing, like really snowing out. Fast forward to 5am and I’m woken up by my house phone ringing and it’s Adam. Except when I pick up the phone, he’s not there so I figured his stupid, once again broken phone accidentally called me. Back to sleep I went only to have my middle child come in at 6am and say it’s snowing. Yes, I heard that at 3:30am. I told her that was really cool (even though I thought there was barely anything on the ground) and I’d get up soon. 7am rolls around and Adam calls, AGAIN. He tells me to go outside and that when he left in the morning, it had really snowed a lot. I was not the happiest to say the least since I didn’t go to bed until almost midnight and was woken up repeatedly. After hanging up though, I finally dragged my ass out of bed and looked outside and WHAT THE HELL?!?! There was major snow in my neck of the woods!!!

We don’t own snow gear of course so we just went outside in our pajamas and boots. It really was like nothing I’ve ever seen. At least not here. I’ve been to the snow but my kids never have. And they absolutely loved it. The day was spent with them outside off and on because their little hands were turning red and frozen. So they kept coming back in to warm up. But it’s something we’ll never forget. 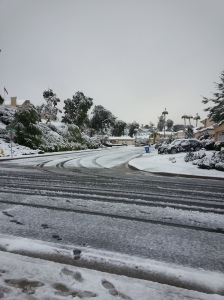 As for ringing in the New Year, we were of course pretty tired from the lack of sleep and the day’s activities so after spending an evening hanging out with some good friends, we headed home and I was out like a light. Dead asleep just after 11pm.

New Year’s Day brought some major changes in our house. We split up our two oldest girls who’ve shared a room for many years and moved our oldest into her own room. That was almost an all day affair because after having kids for 9 years, you accumulate an enormous amount of crap. We donated and threw away so much stuff. But the end result? Two happy girls who are excited for “bigger” rooms and their very own space.

And our annual New Year’s Day tradition of going to my parents house for fried pork chops, collard greens, black eyed peas and mashed potatoes continued. We stuffed ourselves (as we always do when we go over there) and were in bed watching TV by 8pm. It was a tiring couple of days!